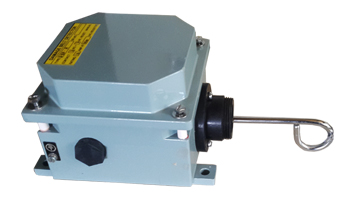 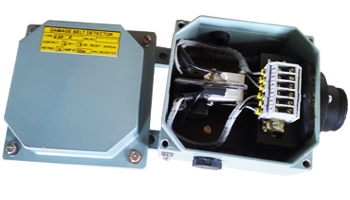 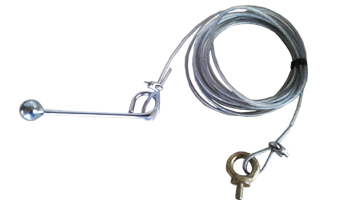 A cable-operated damaged belt detector that appears for punctures, tears, or protrusions through the conveyor belt and provides a way of the automated shutdown to limit the quantity of injury to the conveyor belt. The output contacts of the Damage Belt Detector can control up to 2 separate circuits, one for machinery shutdown and one for an alarm.

Get an additional measure of protection for valuable conveyor belts with these new Damaged Belt Detectors. Economical and straightforward to put in, they warn supervisory personnel of impending belt failures thanks to rips, punctures, splice failures, or sharp objects protruding through the belt fabric.

Damaged Belt Detectors mount in pairs positioned on either side of the belt. The units are connected by two spans of vinyl-coated aircraft cable. One end of the cable permanently mounts to a support bracket and the other connects to a spring-loaded ball within the unit. The cables loop underneath the belt from all sides crossing at the midpoint. A belt problem is detected when an object or a bit of damaged belt hangs below the belt’s surface and sweeps away one or both cables. because the cable is detached, it pulls a spring-loaded ball out of a socket, causing two micro switches to sound an alarm or to pack up the conveyor. One end of every cable is permanently affixed to the bracket preventing the loss of the cable.

It’s simple and effective, and it gives that extra warning of possible belt failure. But, albeit the thought is straightforward, these detectors aren’t lightweights. They’re rugged, heavy-duty units that are designed to figure in any industrial environment including hazardous locations.

So inspect the cost/benefit ratio of this valuable detection system. sort of a good policy, it is the protection you can’t afford to be without.

Damaged Belt Detectors are virtually maintenance-free — because of their simple, yet tough, construction. The units are often wired normally open or normally closed. Everything you would like to put in your system is included, and accessory or replacement items are always available for immediate shipment.

When you consider the value of the typical replacement belt or the value of repairing the mechanical damage from a torn belt, a damage detection system is highly inexpensive by comparison.